Why is the boycott event at the Tilburg University special?

Last Wednesday 22 May 2019, I visited a ‘debate’ at the Tilburg University , about the academic boycott of
Israel, called ”Collaborating with Israeli Universities? A Roundtable”. Why is this event so special, compared to other anti-Israel-campaigns at Dutch universities? When searching on the Internet for “academische boycot”, we only find events related to the academic boycott of Israel. We never find academic boycotts of China, North-Korea, Maroc or Turkey. Countries that are also struggling with separatist minorities. In the highly polarized political discours as taking place in the liberal arts- and social-science faculties, the boycott of other countries then Israel in not taken into consideration.

Another observation when searching for ‘academische boycot’ is that student
organisations , like ‘Students for justice in Palestine’ organize those events.
Observing anti-Israeli events, we saw that radical left organisations as
“International Socialisten’ and ‘Palestina Komitee’ support the efforts of
student organisations to boycott Israël. Moderate democratic left parties don’t
support these efforts.

In Tilburg it is the first time in the Netherlands, that academic staff calls
for boycott of Israel. Presenting this event as a ‘debate’ or a ‘round table’,
is hilarious, as the only speakers of the evening, where well-known
anti-Israeli-activists. Other speakers, who would present a more moderate or
balanced  view on the issue were not
invited.

The organizers tried to present
this event in the context of “academic freedom” and “ freedom of speech”. This
could be an indication that the purpose of this evening was not to really start
a campaign for boycott of Israel, but merely provocation to check whether the
university management is accepting this point of view.

I was sitting in the third row
of the lecture hall, making my notes and wondering why students did not say a
word about the strange setting. No real discussion, no debate and no
pro/con-consideration. Do we have to worry, when a law professor at the
University Tilburg does not reflect on the possible negative impact of an
academic boycott? Who is Michiel Bot, law-teacher at the University Tilburg and
why does he organize a propagandistic one-sided and biased event?

In juni 2017, I observed a pro-Palestinian demonstration at the Dam square in
Amsterdam, as organized by the Hamas fundraiser in the Netherlands, Amin Abou
Rashed. I took a picture of a calm and discrete man, with a Palestinian banner
in his hand. I recognized, that this man did not belong to the pro-Palestinian
hard-core activists. I saved the picture to find out later who he was. Now in
2019, I found out: It is Michiel Bot, the law-professor in Tilburg.

During the event on 22 May 2019, Michiel Bot told the students, that in 2016 he
teached law at the Al-Quds Open University in Abu Dis, north of Ramallah.
During clashes between Israeli soldiers and Arab students, the university was attacked
by soldiers, documents
and equipment were confiscated. In the morning, when Michiel Bot was
entering the building, the windows were broken and glass was scattered on the
ground. Michiel Bot did not elaborate on the possible reasons for the behavior
of the IDF. None of the students in Tilburg asked. On the internet I found out, that several of the stab-attackers in 2016 came from this university. 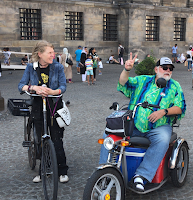 Still I was thinking about the Hamas-demonstration in 2017, were I observed the
Tilburg law-professor Michiel Bot. Was he, or was he not, part of the radical
antisemitic Dam-square protesters, that demonstrate against Israel every week?
When I was approaching the building earlier that evening, I saw ‘the lady with the
Vietnamese hat’, member of the BDS-movement at the Dam square, at the University campus. She turned around after seeing me.
Later that evening, she came into the lecture room and kissed Michiel Bot.

The meeting at the Tilburg University was also organized by the law teacher
Marloes van Noorloos. She introroduced herself tot the public, showing the
brochure ‘Report Collapsing Prospects, Palestinians in Area C, West bank’. This
report is published in 2016. The colofon states: “The mission was carried out
by a multidisciplinary team with expertise in water management, gender and
conflict, human rights, human security and economic and social development. Its
members were: Rachel Kurian, Aalt Leusink, Peter van Lieshout, Marloes van
Noorloos and Dubravka Zarkov, assisted by Machteld Galema.

The mission was initiated and organized by Gate48, a Dutch NGO of critical Israelis living in the Netherlands and Palestine Link, an organisation of Palestinians
in the Netherlands, represented by director Ghada Zeidan.” Of course academic
staff member Marloes van Noorloos did not tell the students in Tilburg, that
area C was defined as being under Israeli control, during the Oslo agreements.
In that sense the area C is in Israeli context defined as ‘disputed’ not
necessarily ‘occupied’.

Also the students are not aware that Gate 48 and
Palestina Link are anti-Israeli organisations and the report therefore does not
have an academic status. All though Marlous van Noorloos
does not have a reputation as pro-palestinian activist, her academic writings
show a remarkable lack of moral compass. In 2014 she published an article which
propagates to de-criminalize the propaganda for terrorism. [1]

After the two academic teachers Marloes and Michiel introduced themselves, the
first guestspeaker, Samer Abdelnour (Institute for Global Prosperity,
University College London), explained the education in the occupied
territories. After his speech he showed a BDS logo and called for a boycott of
the Israeli universities. Samer Abdelnour is an academic, but in this
speech,  he takes side for the
Palestinian Authorities, without even mentioning the opposite side. For
instance the base of the IDF on the campus of the Hebrew University inJerusalem, is criticized. [2]
For Dutch students this may be a strange situation, but for Israeli
circumstances this cooperation is necessary.

Jeff Handmaker (Institute of
Social Studies) is the third speaker of the evening. He is a pro-Palestinian activist,
teaching at ISS. In the last years, I have visited several lectures hosted by
him.This was the first time, I saw
Jeff Handmaker giving a lecture him selves.

In February 2013 he was the host of
a meeting with Norman Finkelstein[3],
who is an anti-Israeli American academic, but not a BDS supporter. A lot of
pro-Palestinian activists and left-wing extremists visited this lecture some
six year ago.

In May 2018, I visited the ISS in The Hague again, to listen to
the speech of Mustafa Barghouti.[4]  I observed that the hard core of the
Palestina Komitee, some of them with a terrorist background  in the seventies, were present in the lecture
hall.

During the lecture of Mustafa Barghouti,  a call for BDS was formulated and presented as
‘peaceful’, not considering that in Israel at the same time a wave of knife
stabbers was going on. BDS as a boycott initiative is more to be regarded as an
additional action, next to the violent attacks that are also carried out by
Palestinian groups.

The speech of Jeff Handmaker is
in no way meeting the standards of an academic debate, as his story is
one-sided and biased. He should at least mention the opposite side of the
polarized debate. When he says that the BDS is regarded as antisemitic, at the
same time he states that no evidence of the antisemitic standpoint is given. A
German student replied in his question, that he as a German has a very strange
and negative feeling, thinking of the boycott of Jewish business in the
thirties. German parties have just a week ago supported a resolution which
states that BDS is related to antisemitism. After this question, the speakers
were talking about antisemitism for maybe fifteen minutes. This is was the most
positive aspect of the evening, because, as the Jewish activist Michael Jacobs
always tells me: “Denying antisemitic behavior is most of the time the same a
confirming it”.

The speech of Adri Nieuwhof, a
Dutch anti-Israel and BDS campaigner, gave some useful insights in the world of
BDS. I was always wondering why the
anti-Israel campaigners are mentioning ‘International Law’, since the
Palestinian terrorist groups that they are supporting (or denying) are also not
following the basic principles of democracy and International Law. Adri Nieuwhof
explained that this is an effort to broaden the movement. “It is not just you,
who is criticizing the Israeli government, it is the ‘International Law’”.

For
law-students it should be explained that International Law always needs a power
to implement it. The reality on the ground often prevent international
regulations to be implemented. Those nuanced points of view were not expressed
during the meeting on 22 May in Tilburg.

To compare the biased way of
teaching with other universities: When a
student at the University College Utrecht writes a paper on the water conflict
in Israel, he is obliged to balance different interests and Palestinian
propaganda is not allowed in his paper, even if  Martijn de Koning, a proPal
activist, is the teacher. When in the eighties, during my study anthropology, I was writing a paper about Ethiopia, the
propaganda of Ethiopian refugees was not allowed and considered as
non-academic.

After the German student was
posing the question on how the BDS could be promoted, when the German
parliament regards the actions as antisemitic, Adri Nieuwhof advised to take
small actions and not defining this as BDS. She advised to start investigating,
doing research and at certain point, taking action. Also Adri Nieuwhof was
telling about the bullying she experienced during her campaign against
apartheid in South Africa and that the actions of the ‘Pro-Israel-lobby’ were
the same.

Another student, from Italy,
mentioned the big age-gap in the pro-Palestinian movement. Most of the
activists are older then sixty and hardly any young students are joining in. He
considered the pro-Palestinian standpoint as ‘career-killing’. Strange enough,
I am myself perceiving the Pro-Israel point of view as career-killing, as I heard
via-via, that some of the students in the lecture room did not speak out,
because they needed this college professors to get a Master degree. Jeff
Handmaker replied , that he was supporting a German student, who was not able
to finish his study in Germany because of his anti-Israeli point of view.In this sense the whole Israel-debate is a
bit of the question “who is victim of whom?

After this evening and this
report you may pose the question what my own opinion is and why I did not ask
any question during the evening. I considered this as a meeting for students
and did not want to disturb this purpose. Also I don’t support the efforts to
forbid this kind of lectures, as trying to silence the radical politics always
leads to more attention and to frustration. For me these events are a nice
opportunity to observe and analyze the pro-Palestinian movement. I am writing a
book about the Palestina Komitee. At the other hand, I think that the
University Tilburg should be worried about the lack of academic principles that
are shown in this lecture. Students will not learn weighing up arguments in
this way of working.


Conclusion
The ‘round table debate’ about the cooperation with Israeli universities, on 22
May at the University of Tiburg, was special, because it was organized by staff
of the law department and not as usual by student organisations. It was also special
because the speakers called for boycott of Israel without any academic balance.
No other staff with other opinion was invited. Another special aspect was the
lack of knowhow transfer. It was more a
propaganda evening. No real attempt to build a BDS movement at the university was done. It looked more
like a provocation . 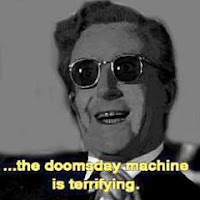 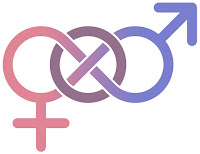 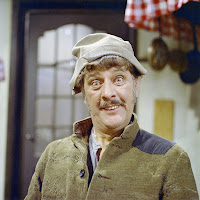 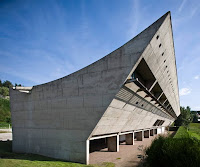