The suffering Palestinians of Mustafa Barghouti

‘Definitely off the path of social science’ and a pure form of demagogy and propaganda. That’s is how we describe the speech of Mustafa Barghouti, last wednesday in the International Institute of Social Science (ISS) in the Hague. The Palestina Komitee Nederland invited the Palestinian doctor of physics and General Secretary of the Palestinian National Initiative (PNI), also known as al Mubadara. 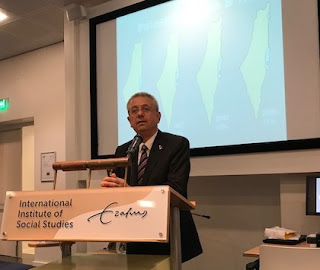 Mustafa Barghouti complained about the lack of democracy in the Palestinian Authority, without explaining the reason of the cancellation of elections. Non of the students asked about the why. Mustafa Barghouti spoke of non-violent action of Palestinians against the state of Israel, since 2003. Non of the visitors of the meeting asked what the definition of ‘non-violent action’ is. Is stabbing civilians part of this strategy? Is rolling burning tires to a fence part of it?  We don’t know, because we did not ask. Does the Palestinian Authority reject the Iranian rockets on Golan, because of the shift to non-violent strategy? I don’t think so.

In the Middle-East context, the strategic choice to non-violent action is meant for the western public opinion and certainly not an intrinsic choice.

Of course the obligatory maps were shown during the presentation. Interesting detail of these maps is , the question: “When did ‘Palestine’ exist?” In the presentation of Mustafa Barghouti, he starts with the year 1897. In that year, all territory of the current state of Israël is owned by Palestinians.  No one asks what happened in the year 1897. It’s the year of the first zionist congress in Basel.

This means, that in the vision of Mustafa Barghouti, the Palestinians don’t have their own congresses and national conferences. The existence of Palestinian nationality is referring to the enemy: The zionist congress. In this blog, I don’t discuss if it is true what he says. This is the analysis about the definition of “Palestinians” and “Palestine”.

Another interesting observation we made during the presentation of Mustafa Barghouti is, the last map showing that currently, the Palestinians own no land. The area-A of West-Jordan is not regarded as officially Palestinian owned. This is in line with the opinion, that the one-state-solution is the only possible option. Mustafa Barghouti contributed as negotiator to the Oslo agreements of 1993, but he no longer supports them. 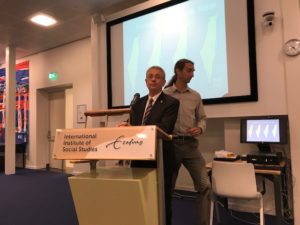 Mustafa Barghouti pictures the Palestinian as suffering caused by the existence of Israël. The decisions made by Palestinian leadership are all seen from a suffering point of view. The partition plan of 1947 was not accepted by Arab leadership. The Oslo-agreements were not satisfactory because no borders were defined. Yasser Arafat was forced to join the 2000 negotiations and should not have gone. It is all presented looking back with the current knowledge. At no time the Arab leadership of Fatah is pictured as acting with a goal.

This image of the suffering Palestinian is not congruent with the goals of the Palestina Komitee in 1969. The young communist students founded the Palestina Komitee with the image of the struggling free fighting Palestinian in mind. Colonized states in the third world, like Angola, Algeria and Mozambique were struggling for freedom and independence. The Palestinian struggle was defined as the same struggle.  One of the female visitors of the wednesday presentation was even convicted in Israël, because she joined this armed independence struggle.

How is the armed and violent struggle of Hamas in Gaza fitting into this model on ‘non-violent’ struggle for one-state solution, as Mustafa Barghouti presents it? After the speech, he hardly gives a convincing opinion about the differences between Fatah and Hamas. He is one of the negotiators to establish unity between the two factions.

Half of the audience is older than 60 years, regarded as followers of the Palestina Komitee, the other half is young student.  To convince the audience it is important for Mustafa Barghouti, to make references to other struggles of the Social Justice Warriors and human right activists. He states that the situation in Israël is worse then the Apartheid in South Africa, because the bantustans were larger. At another time he refers to the Tienanmen uprising in China of 1989, showing a picture of an Israeli tank with an Arab boy in front of it. Later in the speech he refers to the race separation in the south of the USA.

“The Palestinian struggle is a nobel one and I am not pessimistic”,  is the conclusion of Dr. Mustafa Barghouti. The audience is not convinced by this statement. “The western media don’t write the truth about this struggle”, is one of the statements. The video’s about the violence at the Gaza border are a of concern of the ISS visitors.

The opinion that Israël is to blame for everything is not opposed, nor discussed. The way out of the conflict is not seriously convincingly stated. A call for boycott of Israeli products is all the activists have.